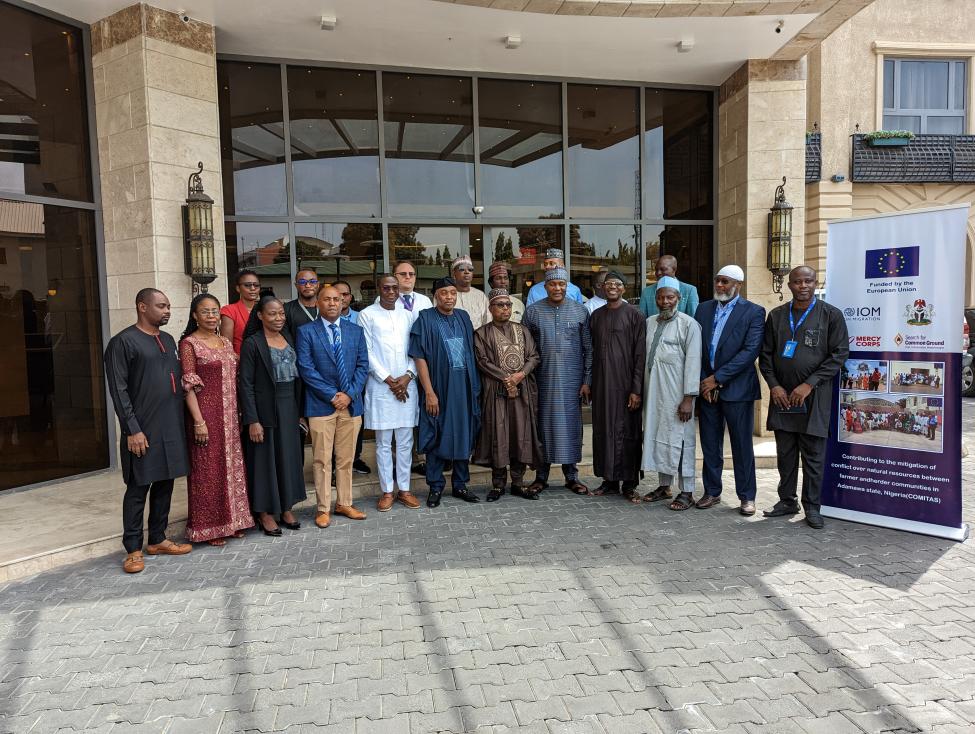 Abuja – Farmer-herder violence has increased in Nigeria over the past ten years with geographic concentrations in North Central, North – Eastern and North - Western States. In Nigeria, these violent conflicts between farmers and herders have been fuelled by competition over natural resources due to demographic growth, expansion of human settlements, privatisation of land, year-round farming practices, environmental degradation, and climate change.

Growing land pressures, social inequalities, changes in land use and access to resources, livestock theft and distrust among communities have made traditional dispute resolution processes ineffective, contributing to the escalation of the conflict.

To contribute to the mitigation of conflict over natural resources, the International Organization of Migration (IOM), together with Search for Common Ground (SFCG), and Mercy Corps are implementing the pilot project “Contributing to the mitigation of conflict over natural resources between farmer and herder communities in Adamawa State, Nigeria”, also known as COMITAS. The project started in December 2020 and was implemented in five Local Government Areas (LGAs) of Adamawa State including Demsa, Girei, Numan, Lamurde, and Mayo Belwa, through a multidimensional and integrated approach.

On 2 November 2022 IOM, its partners, stakeholders, and government officials converged on Abuja for the third high-level project steering committee meeting to provide project achievements and the key lessons learnt during two years of project implementation.

“Amongst the achievements of COMITAS is the establishment of the Transhumance Information Management system by IOM that covered 51 communities in five LGAs of Adamawa state” said Prestage Murima, Deputy Chief of Mission for IOM Nigeria. “Over this period the system received 2,206 early warning alerts that assisted communities in early response,” she added.

In addition, IOM conducted 11 policy dialogues that were attended by over 400 community members and local government officials as part of the project’s objective of building trust between the communities and authorities.

“The EU intends to continue to build on the successes of the project to promote peace and stability in Nigeria” said Ruben Alba Aguilera, Head of Section-Democracy Governance and Migration at the Delegation of the European Union to Nigeria and ECOWAS, representing EU Ambassador Samuela Isopi.

Peace platforms have been established during the project and over 300 dialogues have been conducted which helped in building the social cohesion between farmer and herder communities in Adamawa State. SFCG conducted over 42 Early Warning and Early Response (EWER) trainings and established the Adamawa Forum for Farmer and Herder Relations (AFFHAR) and worked with the media in peace messaging that were all aimed at making a positive contribution to building sustainable peace.

“The COMITAS is aligned to the policies and priorities of Adamawa State government as well as the needs of the communities affected by the farmer-herder crisis, I would like to thank all the partners for working on the project” noted Usman Diyajo Commissioner for Livestock and Aquaculture in Adamawa State.

“This project consistently continued to make a positive contribution to the National Livestock Transformation Plan (NLTP). It is important that the pilot project should be scaled up to reach more communities affected by the farmer-herder crisis” added Dr. Andrew Kwasari, Senior Special Assistant to the President on Agriculture.

It is also contributing to improved inter-communal perceptions by strengthening media outlets' capacities in conflict-sensitive reporting and broadcasting peace messaging.

This project is funded by the the Instrument contributing to Stability and Peace (IcSP) which is a Foreign Policy Instrument (FPI) of the European Union.