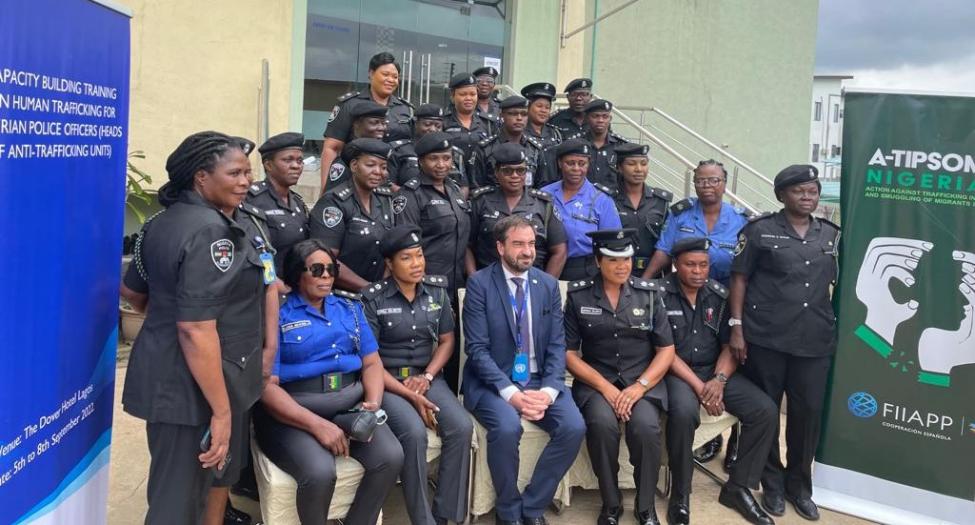 Participants at the workshop in Lagos - Nigeria

The training, the first of its kind, targeted Police Heads of the Anti-Trafficking and Gender Desks and was aimed at improving the capacities of the officers on human trafficking, strengthening coordination between the Nigerian Police Force (NPF) and NAPTIP to ensure synergy in counter-trafficking investigations and prosecutions. The training was held from 5th to 8th September in Lagos, Nigeria and attracted 36 participants from all 36 states of the Federal Republic of Nigeria.

The need to strengthen and improve the capacity of key actors to fully meet the minimum standards for the elimination of Trafficking in Persons to enhance coordination between NAPTIP and NPF on law enforcement and investigation of illicit centres recruiting women for forced surrogacy exploitation while ensuring the rights of suspects are respected across the prosecution process.

‘’The training is aimed at building a seamless bridge for collaboration, synergy,  building structures of mutual concerns aimed at supporting a national purpose of combatting this scourge of Trafficking in Person and Irregular Migration between NAPTIP and the Nigeria Police Force NPF” says Fatima Waziri – Azi, the Director General of NAPTIP. We recognize that NPF is in the areas of victim identification, handling, managing and profiling and there is need for collaborative effort from both institutions”, said Dr. Fatima Waziri - Azi he Director General National Agency for the Prohibition of Trafficking in Persons. “NAPTIP and NPF continue to build a formidable force against trafficking in persons and irregular migration’, she added Despite the NAPTIP having the legal mandate to address all trafficking interventions in Nigeria, the NPF has the legislation and mandate in counter-trafficking as they can identify, arrest, investigate and facilitate the persecution of traffickers. This, in turn, creates gaps in the investigations and prosecution of trafficking cases as both agencies have overlapping mandates. The meeting was therefore met to synergize the efforts of the two Departments, strengthen collaboration and support the operationalization of the National Referral Mechanism on human trafficking in Nigeria.

"This training is prompt as it improves the collaboration between the NFP and NAPTIP and other agencies in delivering as one in its achievement of common goals of handling irregular migration, Trafficking in persons and other related cases. The training will also improve the capacity of the desk officers of the NPF from the thirty-six states of Nigeria who attend to trafficking-related cases in their respective duty stations and encourage referrals to NAPTIP for effective investigations and prosecutions”, said by Afolabi Babatola, FCT Commissioner of Police.

“IOM employs a whole of Government, whole of society approach so that the burden of addressing human trafficking is not only on law enforcement alone. It is important to train and retrain officers for effective prosecution of human trafficking cases’’ says Victor Lutenco, IOM Senior Programme Coordinator Migration Management and Head of Lagos Sub Office. “IOM has also contributed to the strengthening of coordination structures on human trafficking by supporting NAPTIP to inaugurate State Task Forces in 16 states across Nigeria.

This activity is implemented under the EU-IOM Joint Initiative for Sub-Saharan Africa, “Individual Special Measure Project and Cooperation on Migration and Partnerships to Achieve Sustainable Solutions (COMPASS) funded by the Ministry of Foreign Affairs of the Government of Netherlands.