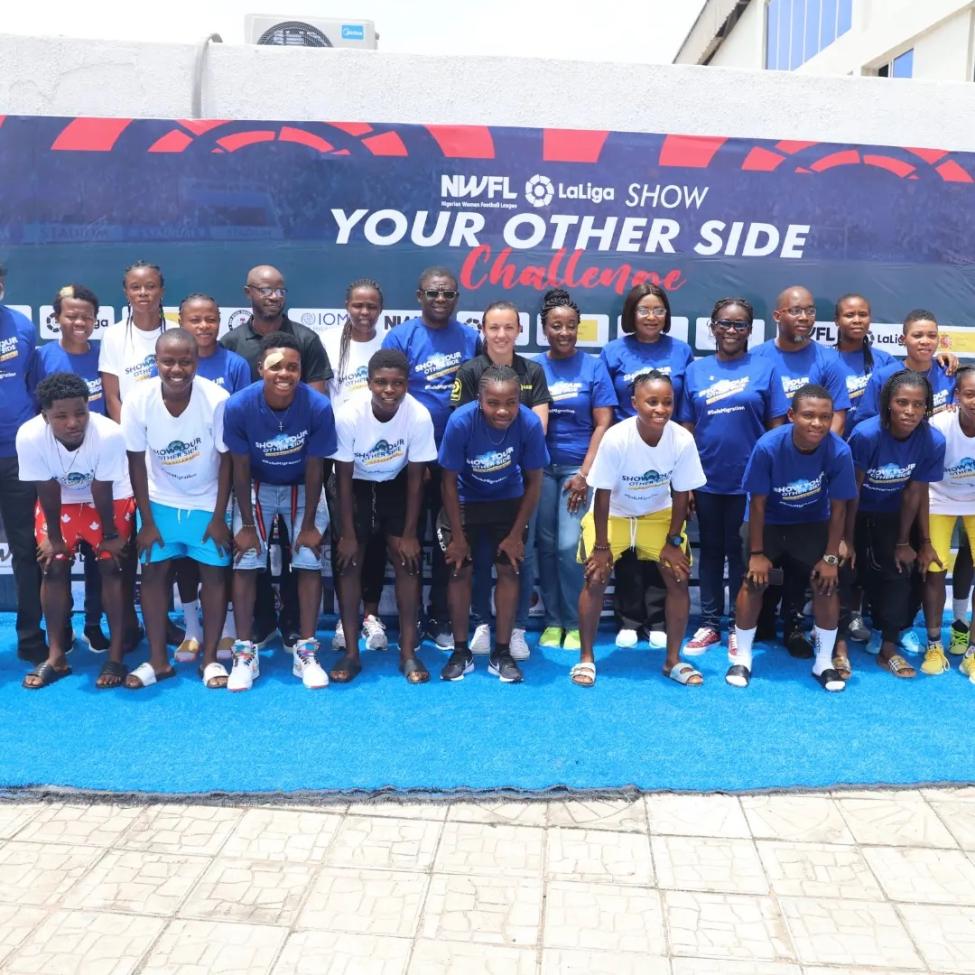 IOM, the Nigerian Women Football League (NWFL) and Laliga hosted a football tournament in Benin City on Saturday (14.05) as part of efforts to raise awareness on irregular migration. Photo: IOM

Benin City – The International Organization for Migration (IOM), in collaboration with the Nigerian Women Football League (NWFL) and Laliga, the top professional football division of the Spanish football league system hosted a football tournament in Benin City on Saturday (14.05) as part of efforts to raise awareness on irregular migration.

Edo state is widely known for its high rate of irregular migration among young people. Data available under the EU-IOM Joint Initiative (EU-IOM JI) show the Southern State of Nigeria accounts for 37% of the total number of returned migrants since the beginning of this project in April 2017. IOM’s Assisted Voluntary Return and Reintegration Programme has assisted the return of over 26,000 individuals with 20,625 supported by the EU.

120 migrant returnees from Edo State also joined the professional football players of the NWFL in a match at the Samuel Ogbemudia stadium. The tournament “Show your other side challenge” brought together famous NWFL players closer to the people and fans of football.

Sports, like football, contribute to youth development and empowerment, recreation, while promoting social cohesion and unity, irrespective of race, religion and background.

“Football matches is one aspect IOM engages in, to capture the attention of young people and provide them with adequate information on the risks of irregular migration and safe means to travel,” said Ms. Cyprine Cheptepkeny, IOM Nigeria Awareness Raising Officer.

“Awareness-raising projects are designed to foster behavioral change among potential migrants, their families and friends by helping migrants to make informed decisions about their journey and consider safer alternatives to migration,” she added. IOM’s social cohesion initiatives contribute to the reintegration of returned migrants into their communities and address vices such as stigma that most of them face upon their return.

In 2021, 68,000 returnees were sensitized on the dangers of irregular migration through awareness-raising activities such as community dialogue, community theatre, school advocacy campaigns and peer education. Every year, many young African footballers are lured to Europe with promises of money and fame in professional leagues only to end up exploited or stranded abroad.

“What we have done and still doing at the NWFL is to create activities, programmes and strong platforms targeted at making football as a spotlight for promoting gender equality and safe migration which has seen over the years a great number of league players making it really big in most of the great leagues in Europe, Asia, America,” noted Aisha Folade Chairperson of NWFL.

The “Show your other Side Challenge” event at Benin City gathered more than 500 attendees who came to enjoy football games of A-level footballer players and engage in fan activities and side events.

“At LaLiga we are passionate about the development of women's football in Nigeria, which is why we collaborated with the NWFL to help the League grow and reach its full potential. With IOM coming on board this year, shows that we are making progress,” said Desmond Chiji, LaLiga Global Network Delegate for Nigeria and Ghana.

The partnership between IOM, Laliga and the NWFL aims to promote safe migration choices and create social cohesion among potential migrants, government partners, civil society organizations and the private sector through football.

This initiative is funded by the European Union and the Government of the Netherlands.